Club dive with the dive club of silicon valley.

Excellent day's diving. The conditions had been good for a couple of weeks, so the visibility today was awesome. We dove from MADs inflatable (see also: kamtime) so we were able to get a little further out from the boat ramp than normal.

We dropped down from the boat into about 70ft of water. We could see the bottom as soon as we descended from the surface. It was an unusual experience for Monterey diving, as usually you dive into a murk and the surface slowly emerges to visibility as you get within a few feet of it. Today I had an incredible sensation: On the descent I was at 40ft. I looked down, the bottom looked as though it was maybe 10 ft away, then I looked to my right, I could see my dive buddy a clear 20ft below me, and he looked only halfway between me and the bottom. Sure enough, we touched down into 72ft of water. Incredible.

Both these dives started in approximately the same place. The pin on the map is the location of the first dive. Second dive was slightly to the north-west of the first site. 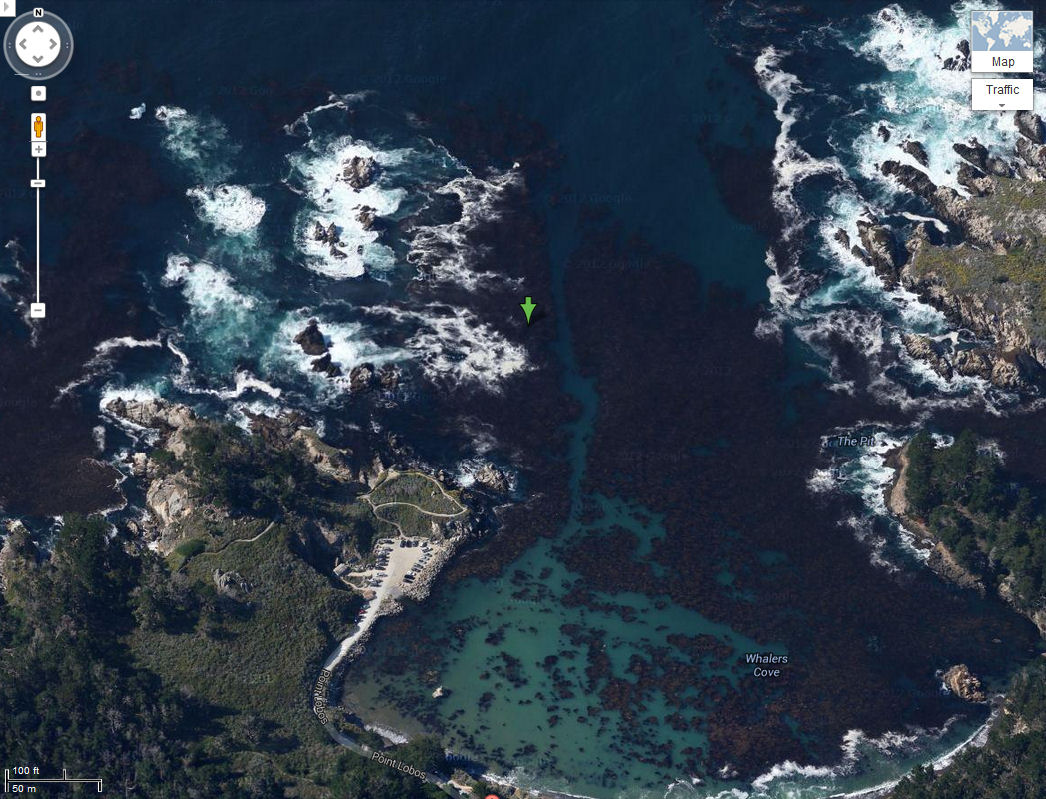 Dropped down onto a number of submerged pinnacles. Bottom was around 70ft, but we hovered above that and explored the walls for nudibranch, shrimp, cucumber, etc. We made our way towards the three large rocks visible on the satellite map. We were heading in an approx 300 magnetic direction.

Bottom varied from sandy to "mountainous", with abundant kelp.

Plenty of large schools of blue and black rockfish. It was wonderful to hang in the water column, facing up, and enjoy the views - hundreds of 9-15" fish schooling over head. Spooked a rock wrasse at one point and it flared up its pectoral fins, which were really pretty.

Best view (for us not the creature involved) was a poor old jelly, in about 20ft of water. It was getting picked at by several rockfish. Still pulsating along, but definitely looking worse for wear, it's tentacles were all but gone, and it's bell was looking a little pecked at.

At the half way point we took a reciprocal heading, once we saw the boat overhead we ascended. Kari was waving at us from the surface, she said she could see us 20ft down on our safetly stop.

Similar to the first, thought the descent point was slightly north-west of the first.

Took a 300 magnetic heading towards the three rocks again. As we got shallower conditions got a little more surgy.

We were not getting picked-up by the boat this time, so rather than taking the reciprocal heading we instead turned on an approx 150 heading to return to the cove and do a shore exit. We made the turn to 150 at approx 15 minutes. As you can see, I was in around 20ft of water at that point as the bottom was getting shallower towards the wash rocks.

Again, the marine life was mainly rockfish: Large schools of blue and black, a couple of vermillion. Saw a couple of lingcod on this dive and a sheephead. Surprisingly no seal action today, unlike two weeks back.

Returning to the boat ramp was fairly easy, once you start heading in on a 150 heading just keep the shallows to your right and skirt between rocky wall and sand channel (on your left).

As always, the visibility dropped drastically as we got close to the parking lot, that's your cue that it's time to surface.