The annual "Day After Dive" for the Dive Club of Silicon Valley. Went diving with 30 or so of my closest dive buddies. 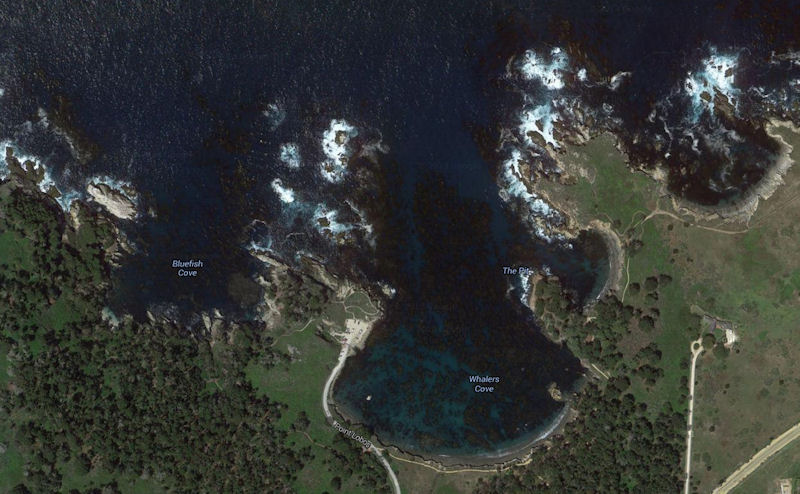 This year we were lucky enough to get a boat charter (actually an inflatable, or RIB) to come drive us out to some less accessible spots, so I did two dives away from the shore. The first at Bluefish Cove Pinnacles, the second at Thumbs Up. After doing two dives from the boat, I managed a third dive from shore, in Whalers cove and Coal Chute Cove. 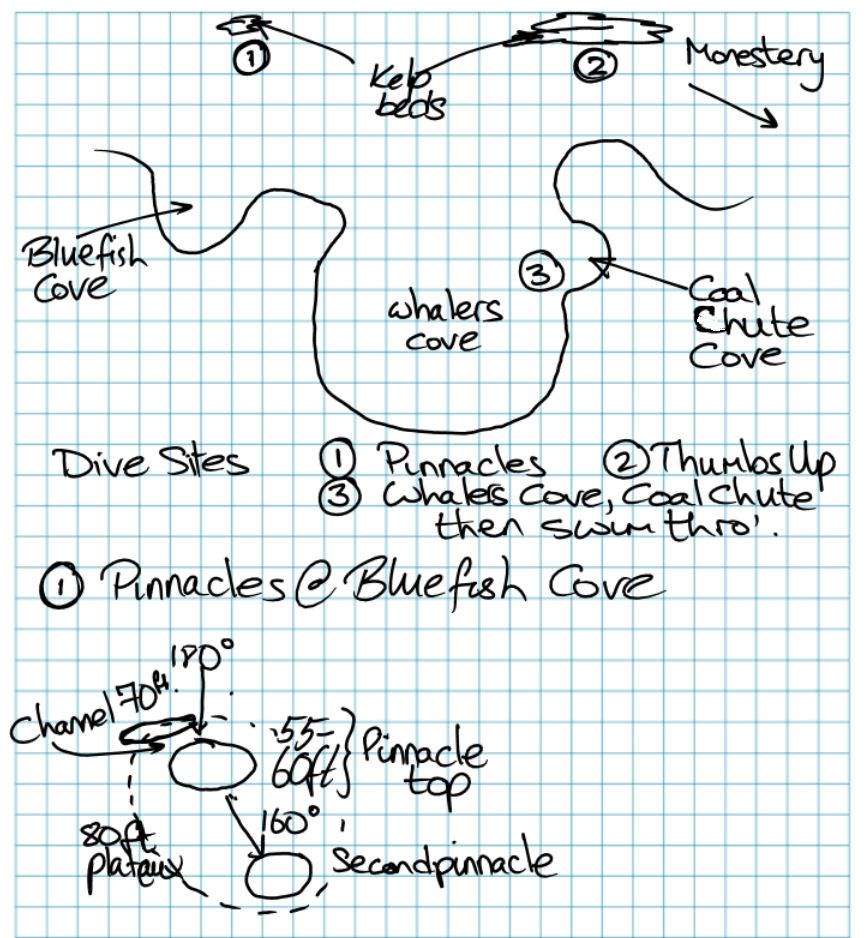 
The sights on the two boat dives were similar. I preferred the second site sightly, as it had a more impressive rock structure, the visibility was a little better. The best aspect was swimming upside down at 70ft and looking up towards the surface through some very large school of juvenile red rockfish. We also saw a fair number of large perch, blue rockfish and a couple of reasonable size lingcod hanging out on the rocks.

Neither of these sites are accessible from shore - the surface swim would be too long. Thumbs-up is not a site that I've heard of before. As the map shows, and the captain told us, it's on the edge of Point Lobos, at a place called Mono Lobo. From what I could tell, it's practically at Monastery.

After a good long surface interval, we tackled the third dive of the day. By this time, the rest of the dive club members had left, leaving just me and my buddy.

Made an entry from shore, via the boat ramp, into Whaler's Cove. MAde a longish surface swim to the center of the cove, before deciding the kelp was too think to crawl over, and dropping down.

Visibility was pretty good and the views were really nice due to the heavy kelp. Always nice to "fly" through the forest. We were in about 25ft of water at this point. Swam on a 60degree heading towards Coal Chute Cove. The depth got a little deeper as we approached the cove, but only to 33ft.

We hit the corner of Coal Chute Cove perfectly - obvious from the sudden high wall to our right. The sun also started to breakthrough more at that point as the kelp is not so thick over there. We swam a little further into Coal Chute, before turning right (south) to make our way to the edge of the cove.

The purpose of this dive was the swim through the cave. The cave entrance is on the sea floor in Coal Chute Cove, but you exit in Whaler's Cove at the surface.

As always, we were unsure exactly how far into Coal Chute we needed to go. We swam back along the wall, back towards Whalers. We encountered one cave. We swam in. You could see light above, but not a wide enough opening to exit. This was the wrong cave, so we left. We swam a little further, back more towards Whaler's, hugging the cove wall, under an overhang, then to a second cave. We entered. This was a larger cave, with some rubble and a large bolder in the middle. It's initially dark, but once you swim in a little you can see light. There was a slight surge, but we were able to swim through. A little tricky as you have to ascend as you swim through, so there's a change in buoyancy. We popped out into a slightly surgy, slightly wavey Whaler's cove. The last two trees up on the cliff give you a guide as-to where the exit is - I suppose in theory you could make the swimthrough in the return direction, but it would be more difficult - descending into a narrow opening, just below the surface with waves trying to crash you into the rocks.

Due to the short period of time in an overhead environment, this is a dive that requires good buoyancy and at least two flashlights. Provided you can find the cove, you don't need particularly good navigation skills, as you just hug the wall of the cove and look for the opening.

You are force to surface on the Whaler's side of the swim though - as I said, the opening is near the surface. From there we took a new heading back toward the parking lot (220 would have been ideal, we did 210). We dropped back down and swam back across the cove, under the kelp.

Nice swim across. Didn't see much spectacular in the way of wildlife. Visibility was good, until we reached the sand channel at the west side of Whaler's Cove. We swam a little way through the murk, then surfaced. We were still a little way off the boat ramp, so I took a new heading (270) and dropped back down to 10ft and swim in under the kelp.

View from the car across Whaler's Cove towards Coal Chute Cove